Back in 2020, when we were in Lockdown, we held a Junior Reporter competition which encouraged members of our community to write a report about a Blackpool FC match they had seen. 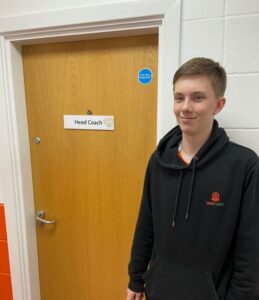 Last week, as part of EFL Week of Action, we invited the winner along to complete his interview.

Diehard Blackpool FC fan and season ticket holder fulfilled his dream of interviewing Head Coach Neil Critchley at the club training ground. The 30 minute session saw Isaac quiz Critch on a number of subjects from Grimmy’s injury, how do you lift the team after defeat, youth prospects and where does he envisage he can take the Club.

You can read Isaac’s Interview here:

On Friday 8th April, I was fortunate enough to get an opportunity to visit Squires Gate training ground to interview Blackpool FC Head Coach Neil Critchley. Critchley was asked about the goalkeeping situation, injuries, young player development and plans for the rest of this season and next season.

The interview started by checking on the health of goalkeeper Daniel Grimshaw, who was caught by the leg of Cameron Archer in the derby defeat to Preston North End. Critchley said that Grimshaw was still experiencing spells of dizziness. The club are monitoring him closely, but will take their time before re-introducing himself into the squad. “The doctors were happy with the scans, so he’s just at home resting”

Grimshaw has been spectacular for Blackpool this season, having taken his opportunity in the starting eleven when club captain Chris Maxwell picked up a quadricep injury. The Head Coach praised Grimshaw, “Grimmy deserves a lot of credit, especially considering that he hadn’t really played senior football before. He had the loan spell in Belgium but that was during covid, so it’s been his first real experience of mens football with fans”.

He also stated that he doesn’t see his goalkeepers as a number one, two and three, but that there can often be a perception of this as only one keeper can play at a time. The goalkeeping department is fantastic, and has Critchley’s full trust.

Maxwell will take over between the sticks for the current time, and will be doing all he can to make sure he keeps his place.

Looking to the future, Blackpool are having a positive campaign of under 18’s football with talented players coming through the academy. I asked Critchley what his plans were for implementing players into the first team over the approaching years. He stated that they are still in a stage of trying to get players senior men’s football. 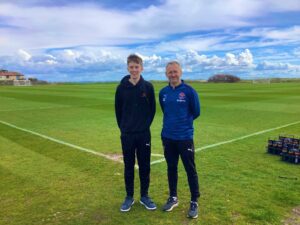 “It is the hardest transition for players in their development, they go from playing players the same age, maybe the year up if they are really good, to playing a 32 year old veteran with 500 league appearances, it requires a lot more physically and is a different experience”.

This is why a lot of the players go out on loan, especially in the middle part of the season as they get seen by local non league clubs. Critchley also stated that if you impress for teams lower down the pyramid like Bamber Bridge and FC United of Manchester you can hopefully get moves up pyramids to teams like AFC Telford, Chorley and Chester. When asked if any of the youth players could feature in the first team before the end of the season, Critchley stated it would be tough, as many are out on loan, and due to those agreements, they wouldn’t be available. Critchley also added that they won’t bring players back from loan to sit on the bench then play 20 minutes when they could be out playing 90 minutes.

This being because “There is no substitute for senior football in a players development” added Critchley.

He added that he picks a team based on the opposition, but also how they’ve performed during training and if they’ve looked after themselves. It’s important for the players who aren’t in the starting 11 to still look after themselves, sleep well, eat well and control other aspects of their life if they are wanting to play. A key thing that Critchley says to the players a lot, is to always be ready for an opportunity as it could come at any time, Ethan Robson being a perfect example, making his first appearance in almost two months against Preston.

This came from injuries in the squad which opened the space up for Robson. He added that appearances aren’t just going to be handed out for free because there isn’t much to play for, they still need to be earned. The aim is to still go out and win football matches, that’s not changed, and it obviously won’t change. Critchley also added that it is about being honest and fair with players, and telling them the truth even if they may not want to hear it or they might not agree with it. So if a player is not happy with the amount of football they have been getting, it’s important to be transparent with them about the reasons. Another thing that Critchley mentioned was about not being equal, as every player is different and needs different things to feel good for competing with the team.

With the busy schedule, players will need rests at times and this will open the door for other players providing them with opportunities, it is then up to them to impress and keep the shirt. Blackpool are beginning to shake off the injuries that had stacked up, with more and more players coming back to fitness.

Critchley also revealed that planning for next season will now begin. When asked about contracts Critchley disclosed “We didn’t believe it was right to start discussing players’ futures yet because of the position we found ourselves in”. He went on to say that this will now begin this week as the situation has changed. Blackpool find themselves in a position where a couple of players are out of contract this summer. The club do hold options to extend the deals by 12 months on a couple. Some of these players are key men like Josh Bowler and Keshi Anderson.

This led to a similar position on recruitment of new players, but added, “first we need to sort players at the club before looking elsewhere”. Critchley did reveal that on Thursday he was on a three hour zoom call with Simon Sadler(Owner), Ben Mansford (CEO) and John Stephenson (Head of footballing operations) discussing how to best approach next season. The coach will begin to look at areas he feels the club can improve and look for players he believes will be good additions to the squad and who will help improve the quality of the team.

Before becoming Blackpool manager in March 2020, Critchley worked for Liverpool, first as under 18’s manager before being promoted to under 23’s manager. This meant he had quite a close relationship with Jurgen Klopp. When asked on how much he learnt from Klopp he admitted he was fortunate to work closely with Brendon Rodgers and then Klopp.

“To have not learned anything, I would have had to be walking around with headphones in 24/7”, Critchley joked. Critchley watched how they acted in specific situations, how they dealt with players, how they answered questions. However the now Blackpool coach also stressed that he has to be himself. “Players can sense when you’re not being authentic. There’s only one Jurgen Klopp, I’ve got to be myself in management” he said.

Critchley took charge of two senior games at Liverpool at Anfield so talked about the comparisons between the atmospheres at Anfield and Bloomfield Road. He opened with “Oh it’s not a competition, nothing beats Bloomfield Road and the north stand, but no seriously, there’s a couple of comparisons between the two clubs”. Critchley added “Both clubs are built on passionate and good people, with strong support. I probably feel it more at Blackpool because I have more responsibility, I was never senior manager at Liverpool” .

This led to the 43 year old discussing his connection with the Blackpool fans and how much he takes from it. “It means everything to me,” he said. “I have a family, I know how much tickets cost, I know how much it costs to travel, I know how much it costs to put food on the table, so the fact they consistently travel and support us like they do is special”. Critchley discussed that this made every win feel even better, but also made defeats harder to take. He added his determination to make every game more enjoyable of an experience for the fans by playing good attacking football.