All of the individuals who participate in this competition are 16 years of age or older. These activities encourage participants to live a healthier lifestyle while giving them the opportunity to socialise and play football in an inclusive environment.

The Trust also has an U16 team from Park Community Academy that attended the same fixtures. 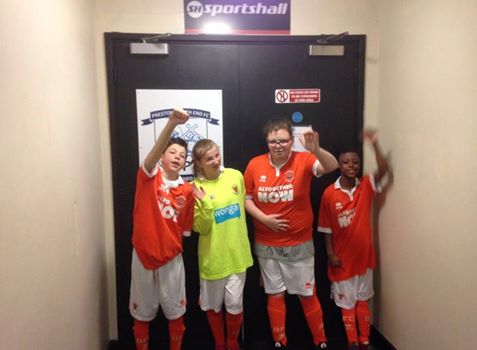 There were two teams from Blackpool FC Community Trust who entered the competition back in November.  The A Team went into this round of fixtures joint top of the group and the B Team were also sitting pretty at the top, three points clear of nearest rivals AFC Masters White.

The Trust’s A Team had four tough fixtures, with double headers against second and third placed Burnley Community and Mill Hill Blue that we struggled against last time out. The team started off very well drawing 2-2 with Burnley College and an emphatic 5-1 victory over Mill Hill Reds, this was the teams first victory of the season against this opposition.

The B Team also had a terrific start beating title rivals AFC Masters White 4-1 while also defeating Burnley Disability and Burnley Town. They were then part of the game of the season against third place Mill Hill Blue, the Trust team found themselves 3-0 down within the first two minutes but worked together to fight back and claim a 6-3 victory.

The A Team went on, to what was arguably their toughest test of the day, again against Mill Hill Blue. The Trust came away 2-0 winners and played their penultimate match of the day beating Burnley Community 2-1, which sees the team sitting three points clear at the top of the standings.

The B team also went the day unbeaten, comfortably defeating Fleetwood Town and North West Scorpions extending their lead at the summit of the table.

Our U16’s from Park Community Academy were great as well winning a number of their fixtures.
They had four new players who took part in their first ever fixture, one of the highlights of the day.

Owen Coyle said “Both teams were excellent today, going unbeaten throughout the day is a massive achievement and for two teams to do this is special. Even more importantly the participants had a great time with a number of players making their first appearance at the ability counts fixtures.”

Overall the day was a huge success with teams coming out with nine wins from ten games. Well done to all the guys who took part. We are looking forward to the next fixture of the Frankel Topping Lancashire FA Ability Counts League on Saturday 7th May which is the penultimate fixture of this season.